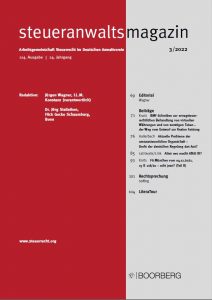 The Federal Ministry of Finance (“Bundesministerium für Finanzdienstleistungsaufsicht”, BMF) has commented on this topic for the first time in a draft for a first supplementary letter to the BMF guidance letter of 10 May 2022. Private investors take note: If units of a virtual currency or other tokens are acquired or sold either via the trading platform of a foreign operator or via a decentralised trading platform (DEX), so-called foreign affairs within the meaning of Section 90 (2) of the German Fiscal Code (AO) shall be assumed, which would trigger […]

Article by Dr. Steffen Kranz, LL.M. in NWB-EV No. 7 of 06.07.2022 Page 214   The tax authorities have disclosed their opinion regarding individual questions on the income tax treatment of virtual currencies and other tokens in the BMF letter dated May 10, 2022. The classification of virtual currencies as other assets within the meaning of Section 23 (1) sentence 1 no. 2 sentence 1 EStG is uniformly and unambiguously affirmed within the fiscal court rulings and the BMF letter. This article provides an overview of the status quo regarding […] 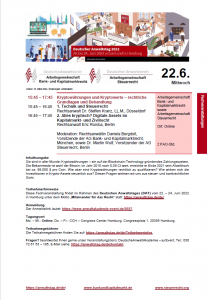 Go to the flyer

Letter from the Federal Ministry of Finance

In-game services, such as the rental of virtual land, are not subject to VAT. The sale of the tokens received for this service can, however, lead to a service that is subject to VAT. This was the conclusion reached by the 5th Senate of the Federal Fiscal Court (BFH) in its ruling of 18 November 2021 (Ref. V R 38/19), which was recently published. The highly abbreviated facts on which the judgment was based: The taxpayer (plaintiff) acquired virtual properties through the Second Life Market Place as part of his […]

The Cologne Fiscal Court has published the ruling of its 14th Senate dated 25 November 2021 (Case No. 14 K 1178/20). This is the second ruling by a German tax court on the taxation of “cryptocurrencies” or – in the terminology of the German tax authorities – “virtual currencies”. The first ruling came from the Baden-Württemberg Fiscal Court and was already pronounced on 11 June 2021 (Case No. 5 K 1996/19). In substance, both proceedings are comparable, since here as well as there the tax liability of gains is an […]

Here is the first ruling of a German fiscal court on the taxation of “cryptocurrencies” or – as the German fiscal authorities call them – “virtual currencies”. It is the decision of the Baden-Württemberg Fiscal Court of June 11, 2021 (Case No. 5 K 1996/19), which was recently published. In summary, the case in dispute concerned a taxation of gains realized in 2017 from the sale of cryptocurrencies held as private assets within the relevant period of one year. Of course, such a ruling gives many taxpayers and their advisors […]

On June 17, 2021, the German Federal Ministry of Finance (BMF) had published a draft of a BMF letter on the income tax treatment of tokens in general and virtual currencies such as Bitcoin in particular, which had been coordinated with the supreme tax authorities of the German states. Subsequently, the BMF received numerous comments from various associations, most of which appreciated the general aim of the BMF letter to improve legal clarity and thus also planning certainty, but at the same time expressed extensive criticism on the partly undifferentiated […]